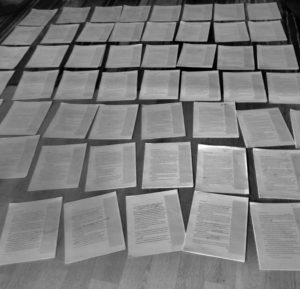 HUNGRY, HIGH AND HAMMERED
(short stories and a novella)

Dancers stories. In progress. Addiction, relationship and despair. Sometimes funny, always dark. Some of these stories have been published or performed and others are half written.

Be A Man tells the story of Tommy, an itinerant musician who hitchhikes his way to Calgary and arrives at the height of the Calgary Stampede. There, Tommy falls in with a sketchy drug dealer and becomes enamored with Ava, a young Stampede performer, all while hiding a secret and trying to assert his masculinity. It is only in the story’s final lines that the reader discovers the reason behind Tommy’s odd behaviour and seemingly irrational fears … he is a woman living as a man.

This well crafted story successfully hides its twist ending from the reader until its final moments. By hiding the gender of the main character the story reveals, upon re-reading, an insightful commentary on gender politics.

A Few Small Nips offers us a glimpse into the head of Mia, a contemporary dancer who has been hired to play the part of Frida Kahlo in a new work by a renowned local choreographer. As the first day of rehearsal draws near, Mia’s troubled past with her mother and her jealousy towards other, more successful dancers that has plagued her life begin to surface and incapacitate her.

A Few Small Nips shares insight into the fears, frustration and self-doubt that plagues artists of all stripes, but which is particularly common to the world of dance, where careers are short and the approval of choreographers can make or break lives.

In Up In Smoke the dancer shares her fond memories of the last road trip with her beloved Peugeot 504, an experience intimately tied to memories of her aging father and her youth spent working at the family’s gas station.

Up In Smoke juxtaposes reflections on a wistful, idyllic past with a gritty, carefree present. The friction demonstrates how far the narrator has traveled from her family and how easy it can be to re-establish connections.

The Salmon Fling shows us the nadir of a relationship, playing out its endgame in the isolation on the wet east coast of BC’s Malcolm Island. Here the dancer recounts her introduction to the addictive personality of her lover, the machinations that insinuated her into his life and destroyed his previous relationship, and the subsequent decline of their torrid affair.

The Salmon Fling gives us an insider’s perspective into the mind of “the other woman” and the needs that drive seemingly unsympathetic actions.

The Fifth Position is a comedic description of a man who may very well possess the worst bedside manner in the global massage community. The awkward situations and uncomfortable expectations will resonate with any woman (or man) who may have wondered what those hands are up to. Designed primarily as a comedic tale to provide levity amidst the serious subjects that dominate the collection, The Fifth Position nevertheless touches upon issues of personal responsibility.

The Shaman is set in a nameless South American village, high in the Andes, where the travelling dancer and her alcoholic lover have come to stretch the last of their meager savings. In this village, at the very end of the tourist trail, hardcore addicts seek the thrill of rare drugs and unknown experience.

The Shaman is perhaps the darkest story in the collection, takes us into the impact of addiction on an already strained relationship.

Sherry and Sour Cow’s Lung takes us inside the psychology of anorexia. The central character, a student at a prestigious ballet school, manifests her rebellion against her domineering parents and the school’s authoritarian headmistress by controlling the only terrain left to her: her starving body. Just how unprepared both the school and her parents are to battle this disease is embodied by what passes for nourishment during their serious talks with her: sherry and sour cow’s lung.

Sherry and Sour Cow’s Lung, situated at the end of the collection, takes us back to its roots by exploring the psychological origins of dysfunctional behaviour. In My Fair Lady we meet a young ballerina named Jodie and her mentor Adam. But Adam is not just any mentor: he is the anarchistic punk rock proprietor of an antique-store-by-day-booze-can-by-night and the unofficial kingpin of Winnipeg’s underground scene. Jodie thinks Adam only wants to sleep with her and she’s tempted even though he’s more than twenty years her senior. But Adam has other designs… on her independent spirit.

In My Fair Lady we see how innocence is willingly corrupted and watch a young mind gain independence set against the backdrop of 1980’s Winnipeg and San Francisco.